A Tale of Two Cities

For thirty minutes, there were windy roads with mere glimpses of civilization every now and then.  It may have been 11 at night but civilization was no where in site.  Then out of no where, we took a turn and deep in a valley below was the bustling metropolis of Medellin.  The lights of the city scorched the mountainside like a bush fire raging through the forest.  As our driver made his way down into the heart of the city, salsa music blared from the bars and the warm air breezed through the car.  We had arrived in Colombia.
Nestled in a valley is Colombia's second largest city, Medellin (recommendations to come next).  It was here where we spent the first part of our trip in South America's northern most country.  We received mixed reactions upon telling people we were headed to Colombia; "Is it safe", "That's amazing", "Why Medellin".  The cautionary reactions happened more often than not and maybe for good reason.
In the 1980's and early 1990's, there is not a chance in hell we would be vacationing to Medellin.  It was at that time it was dubbed the most dangerous city in the world.  It would be the equivalent today of traveling to Damascus or Baghdad.  So why was it that murder was as common as a cup of Colombian coffee? One word, cocaine.
The rise of the drug cartels had brought violence across Colombia but there was no city more renowned than Medellin.  And this was of course due to one of the most famous criminals of all time, Pablo Escobar.  Medellin, his home town, was turned into a war zone that tore the city apart for years.  Yet, even with his death, Medellin remained unsafe given the instability of the government and the threat of guerrilla armies.

But through it all Medellin has persevered and thrived. The people of Medellin are immensely proud of their city and have worked extremely hard to get it to where it is today.
This transformation did not happen over night.  The city has poured countless resources into making the city where it is today, and they are not finished.  One of the most prevalent changes I noticed over our stay was education.  Education is what turned some of the most dangerous neighborhoods around giving kids a place to spend their time versus joining gangs.  It is no coincidence that two of the most dangerous buildings of the city are now home to the department of education.


Medellin has also poured tens of millions into infrastructure giving the city life and allowing the working class an easier way to get to and from work.  A metro system runs throughout the city that is clean, safe and very easy to use.  But what is more impressive is the vertical transportation.  Tens of thousands (maybe even hundreds of thousands) of Medellin's citizens live on the mountainside making it more than difficult to get to the city center (and you think you had a bad work commute).  Medellin has built gondolas and escalators that make these slopes much more accessible.
Medellin was truly an impressive city and certainly exceeded my expectations. Given the past 30 years, it has no doubt won the comeback city of the year.  It also gives home to the Damascus's of the world and I can only hope that we'll be heading there in 20 or 30 years with the same type of reaction.  So for those teetering on the edge wondering if they should go to Colombia and specifically Medellin.  Stop thinking and book your flight, it's truly an incredible place. 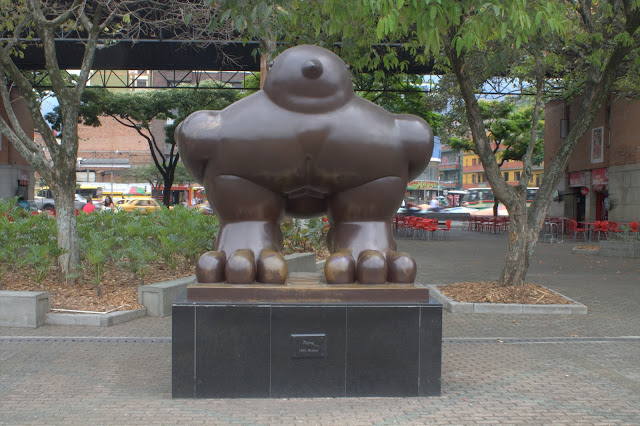