The Little Town of Eze

When in Nice, there are a number of different day trips you can take to surrounding cities and towns. The most popular is the posh town of Cannes and the luxurious Monaco.  Monaco is what most tourists do since it is only a 20 to 30 minute trip and is easily/cheaply done on a bus.  However, I had a friend who had lived in France and recommended an alternative, Eze.

Eze is a hilltop medieval village that overlooks the entire French Riviera and is located in between Nice and Monaco.  It is a quick bus ride from down town Nice and cost a mere one euro.  The ride itself is worth it alone because it's on high curvy roads that overlook the ocean.  After a few moments of holding our breath as the bus neared the edge we finally arrived at the hillside village.

Eze's most famous visitor was Fredrick Nietzsche as there is path named after him that goes from the oceanside to the top of the  village.  The village itself is really quite small.  There are a few restaurants and most of the stores display local artists.  However there is a five star hotel that had rooms overlooking the ocean and based off the drink menu must have cost quite a bit.


To visit Eze, you only need a few hours which makes it a great trip after laying out at the beach.  Walking around the narrow streets provide great chances for photo opps while posing next to the historic cobblestone houses.  Yet the reason every one goes to Eze is for the view, and it is easy to see why.  (Side note, it cost 7 euros to go to the top but it is well worth it.)

A few more pictures from our journey to Eze. 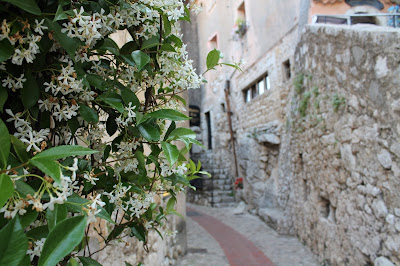 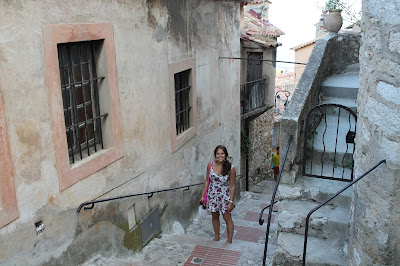 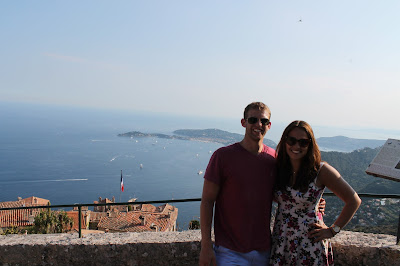 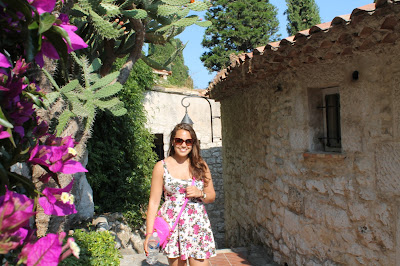