Although we are only 5 days into 2014, it is not too early to start planning for Oktoberfest 2014.  In fact, our group started booking flights and hotels the first week of January last year.  Feel free to contact me if you have any other questions.

1) Getting a table:  Before heading to Oktoberfest we had reached out to every tent for a reservation but was unsuccessful as we were there for the busiest weekend of the year.  Keep in mind, this was in February so you can see how hard it is to get table.  This turned out to not be a problem at all.  Oktoberfest tents actually increased the amount of non-reservation tables for the many festival goers who would be showing up without a reservation.  (In our tent, about 2/3 of the tables were non-reservation.)  The key is to go early and wait in line.  We got there at 7:50 and there was easily less than 100 people waiting in line (The tent holds thousands so it was not  a lot). We had no issue getting a table for all ten of us and if there were only a couple, we probably could have gone at any time and snagged a spot as people who had to much to drink head for the exit.  Moral of the story, get their early and you will be fine.

2) Attire:  Buy the real thing, if you are wearing a costume you will be heckled and if you wear jeans, at least put on a checkered shirt so you blend in.  For guys, you can find a real pair of lederhosen for 80 euro, probably not less.  Everyone wears lederhosen/drindls and it will enhance the experience if you do as well.

3) Stay: Hotel prices are going to be 5 times the regular price.  My suggestion is to find a place within walking distance to the festival, it will make stumbling home much easier.  Atlas city hotel was great, it was a five minute walk, clean and comfortable.

4) Length:  Anything more than 2 - 3 days will be more than enough.  Think of it like Vegas, after 48 hours your ready to get out of there.  We were there for a night and a full day with a day off in between,  anything more than that would have been too much for us.

5) Check out Munich: Munich has much more to offer than the Oktoberfest.  Walk around the old town, ride along on Mike's bike tour or sit in a famous German beer hall.

6) Pace yourself: German beer is typically stronger than American beers and the Oktoberfest is no exception.  Germans actually make beer at the Wisen stronger than most beers and you would never be able to tell.  It is a marathon not a sprint, you don't want to be like the Italians who were having a great time at 10:30AM but had their heads down on the table by noon.

7) Tents: No matter which tent you go to, your going to have a great time.  There are some general themes with each tent, for instance the Hofbrau tent is known for tourists.  The two we went to were Spantenbaru and Hacker.  Spatenbrau was huge, rowdy and had a bit of an older crowd.  We were told to go to Hacker for our full day as this is where many young locals go and this was clearly obvious.   The majority of people in the Hacker were young, foreign and just as rowdy if not rowdier than Spaten.

8) Have Fun:  This will be an experience you never forget. 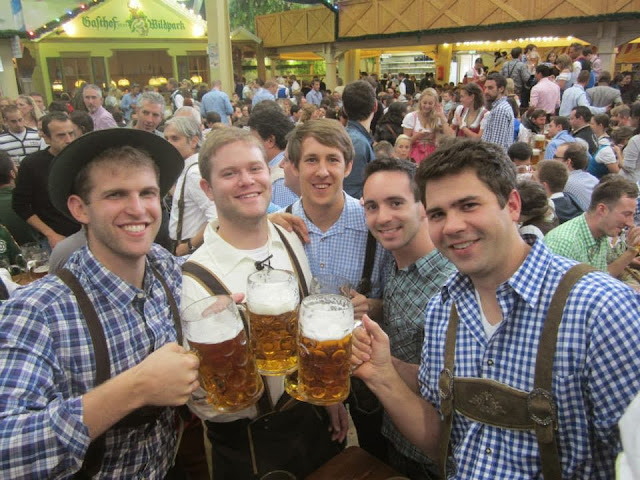 I will be back on the road next week to Nicaragua with the Orringer's so stay tuned.
Labels: Eurotrip Germany Oktoberfest Tips